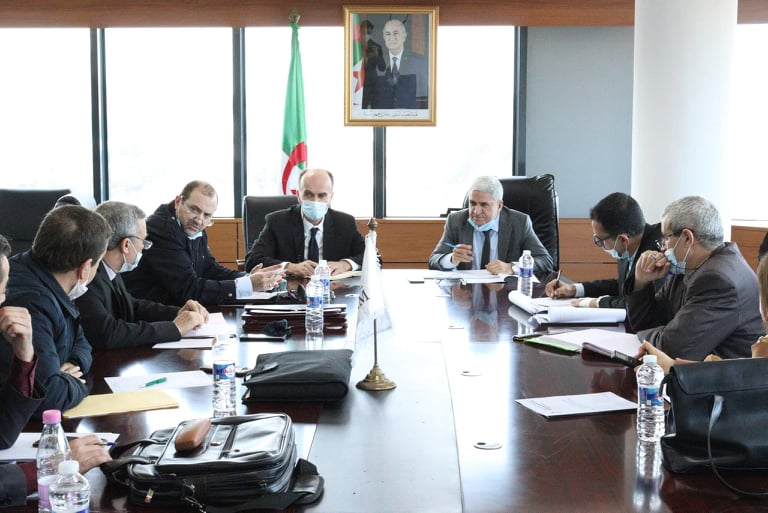 Press release
Following the orientations of the Minister of Industry and the Minister of Energy and Mines, a meeting was held between the GICA Group, its subsidiaries Aggregates and CETIM (Centre d’Etudes et de Services Technologiques de l’Industrie des Matériaux de Construction) on the one hand and the National Agency of Mining Activities (ANAM) on the other hand.

During this meeting, the GICA Group and ANAM reviewed the opportunities offered by the mining sector as well as all the constraints which hinder the development of the mining exploration and exploitation activity by the subsidiaries of the public cement company, in order to remedy them.
The two parties also discussed the prospects of strengthening cooperation to facilitate, for the GICA Group, the extraction of raw materials for construction materials, to diversify its activities.
This step is part of the Government’s strategy to revive the mining sector, with the involvement of national economic operators in the various segments of processing of mining products, in order to diversify the national economy, in a logic of substitution-importation.
In addition to the production of cement, aggregates and ready-mix concrete, the GICA Group aims to diversify its range of products with other materials such as marble, granite, travertine and baryte.
As a reminder, the GICA Group has already launched into the exploitation of marble, following the takeover of the Guelma Unit and the ONYX quarry of Mahouna, previously owned by the National Marble Company (Enamarbre).
The GICA Group has made significant investments to rehabilitate this quarry and modernise the production facilities of the Guelma unit, which was in financial difficulty, thus preserving over 97 jobs.